It is now less than a week after Fat Tuesday, and Christians everywhere are lamenting the beginnings of Lent, a 40-day period involving fasting or abstaining from certain luxuries. Of course, most of my Christian friends have deciphered the ins and outs of getting through Lent in one piece (hint: NEVER give up chocolate), but I still want to throw things back to a happier time on the Christian calendar: Fat Tuesday!

Here in the United States, Fat Tuesday is synonymous with the Mardi Gras festivities in New Orleans, Louisiana, where an uproarious party swallows the city’s streets every year. The parades, the dancing, the King Cake… oh my!

Today, though, I want to talk about Fat Tuesday where it originated: in Europe. There the holiday is generally referred to as Shrove Tuesday, although it also has many regional names (such as my personal favorite, courtesy of Ireland: Pancake Day).

In addition to being the most fun, Ireland’s name for Shrove Tuesday may be the most accurate. Europeans across the continent, Christian and not, eat their country’s own version of pancakes on Shrove Tuesday. This began as a way to use up leftover butter, sugar, and fat before the period of fasting began.

Having grown up knowing nothing but the American pancake, I did a double take when I learned about some of the dishes defined as pancakes in Europe. Unlike the fluffy buttermilk pancakes of my childhood, European pancakes range from thick to paper-thin, griddled to baked, sweet to savory. It was a whole new world!

The Dutch take their Shrove Tuesday pancakes in the form of pannenkoeken, huge, dinner-plate sized pancakes that are slightly thicker than a crêpe. Pannenkoeken are usually somewhat eggy and can be eaten with everything from fruit and stroop (a thick syup) to cheese and onions. Pancakes are considered a homey food in many countries, but in the Netherlands people tend to go out for them– families often get their Shrove Tuesday meals from a pannenkoekenhuis, or a specialized pannenkoeken restaurant!

In Russia, Shrove Tuesday lasts a full week and is known as Maslenitsa. The pancake making begins on Monday and lasts through the following Sunday! The pancakes usually take the form of blini, which are thin, but can take other forms as well, such as oladi, small, thick pancakes made with yogurt or soured milk. The treats take on different significances throughout the week: on Thursday, children go chanting house to house to collect the food from neighbors, while on Saturday, newlywed wives throw pancake feasts in an attempt to please her new in-laws.

The Welsh have a range of Shrove Tuesday traditions as well, including kicking cans up and down streets and begging door-to-door for flour. Their Shrove Tuesday pancakes, crempog, are buttery and thick, and can be served plain or speckled with raisins or currants mixed in. They are traditionally cooked on a planc, or cast iron bakestone. Although they are historically eaten on Shrove Tuesday, you can now find them (or make them!) in Wales all year round; they are often buttered, stacked, then cut like a cake to be eaten at teatime.

I want to share with you a recipe for British Shrove Tuesday pancakes. Like pannenkoeken, they are slightly thicker than a crêpe, and a bit eggier than American pancakes. Last time I made these at home I tried a variety of toppings, like fruit and maple syrup, but both my mom and I were surprised to find we preferred the traditional British preparation, in which the pancakes are drizzled in lemon juice and sugar. Mmmmmm! These pancakes are easy, quick, and sure to be a hit. Enjoy! 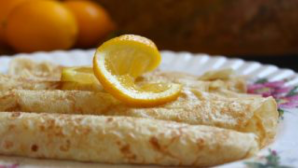 View all posts by Angie Walsh